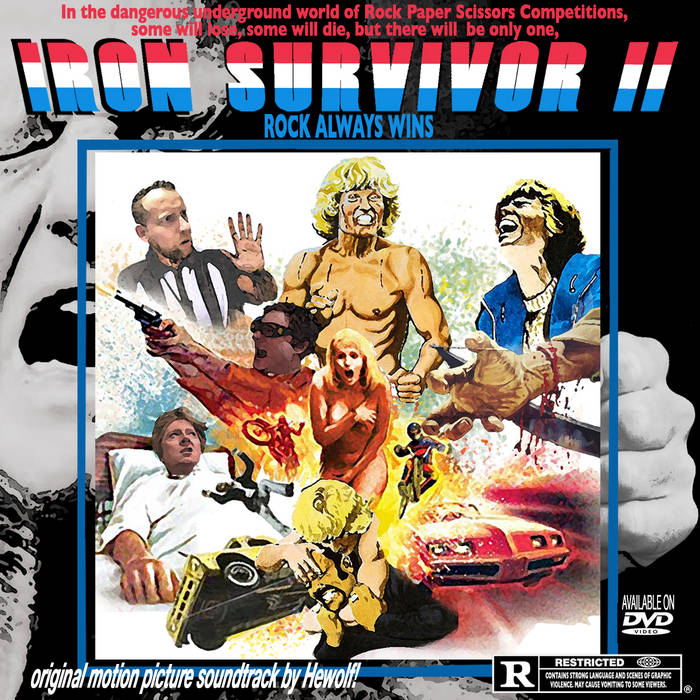 Yet another casualty of the 2020 global pandemic. The film was 'Iron Survivor 2: Rock Always Wins'. It was to be a movie about Danny Laredo, a lonely kid seeking acceptance, who wandered too deep into the dangerous underground world of high-stakes Rock Paper Scissors Competitions. It was to be a masterful blend of 'The Deer Hunter' 'Karate Kid' and 'Fight Club'.The movie was ultimately scrapped when it was obvious that completing the film would be impossible because of the far-reaching effects of the pandemic. It is sad to say that the world will never see this cinematic journey, but the soundtrack is now available.
Movie synopsis:
The moment Danny Laredo was thrust into the dangerous underground world of high stakes Rock Paper Scissors Competitions he found himself hurled upon a hideous landscape of carnage and fleshly bloodlust at a killing pace. Will he uncover the temptations of physical ecstasy or fatally plunge into the ultimate betrayal? There is only one man that can interpret the Oracle of the Rock but will Danny find Esteban before he confronts Rick Skees and his Machete Gang in the final showdown. Could this be Danny's turning point or will it prove to be his grisly demise?

Bandcamp Daily  your guide to the world of Bandcamp

MF DOOM is given his flowers, plus appearances from MC Jada Imani and Stanley Ipkuss